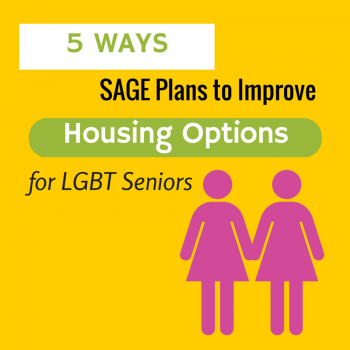 People over age 65 are the fastest growing age group in the United States, and public policy experts say there’s a rapidly growing need for housing that meets their needs. That’s especially true for gay, lesbian, bisexual, and transgender seniors; studies have found that LGBT elders are more likely than other seniors to face discrimination when they’re looking for a place to live.

To address issues of scarcity, affordability, and discrimination, SAGE (Services & Advocacy for GLBT Elders) announced earlier this year that it’s working on a long-term plan to improve housing choices for LGBT seniors. The group has outlined 5 areas that need improvement in order to better serve LGBT people as they age.

The first step to finding housing is to know that Fair Housing Act anti-discrimination policies apply to LGBT people. Not everyone has gotten the news, as a national HUD study found that gay and lesbian couples were more likely than straight couples to face rental discrimination. But federal law says that owners, landlords, and supervisors of properties served by HUD and the Federal Housing Authority may not ask prospective buyers or renters about their sexual orientation or gender identity. People who encounter anti-LGBT discrimination during their housing search can report it to HUD for investigation.

Besides educating property owners and managers about LGBT protections under the Fair Housing Act, SAGE is also working to help existing senior communities to better serve LGBT residents. Cultural competency training for managers and employees includes awareness of LGBT rights and concerns; intake documents, community policies, and outreach that are inclusive and relevant to LGBT people; and diversity within the organization.

Affordability is a huge challenge for many seniors, especially those who have faced income and employment discrimination during their peak earning years. SAGE’s state and local groups have begun surveying their communities to pinpoint LGBT senior needs, with the goal of deciding whether to build new communities, improve access to existing housing, or both.

SAGE and other rights groups are pushing for state- and local-policy changes that will support and expand LGBT seniors’ rights. This is necessary because discrimination against same-sex couples seeking housing is widespread. A 2014 Equal Rights Center study found that same-sex couples inquiring about senior housing in 10 states ran into discrimination 48% of the time compared to straight couples.

New housing might seem like the top priority, but it’s unlikely that development alone can end the LGBT senior housing shortage. That’s because the number of gay, lesbian, bisexual and transgender elders will reach 3 million people in the next decade and a half. But senior communities for LGBT people are needed, and SAGE supports affordable developments in some cities such as New York. The group is also offering its development model to agencies around the country for use by local and regional developers.

Among the plan’s supporters are the US Department of Housing and Urban Development, the Ford Foundation, affordable housing developers, and advocacy groups on minority aging issues. To learn more about the National LGBT Elder Housing Initiative, visit SAGE USA.

To learn more about LGBT housing and community support in a city near you, check out our blog series.

How to Write a Book about Your Life
Applying for Medicaid