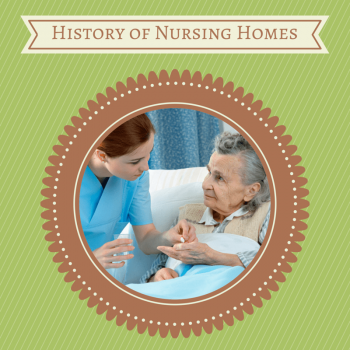 Seniors today have it better than they have at any other point in history. Medical advances mean that most people can count on living longer and more comfortably than in the past. And the senior living options available to people of every class are far superior to what they’ve traditionally been.

On the way toward developing the kind of nursing home options available to seniors today, a number of different living arrangements tried out the idea of grouping many seniors in one place. Unfortunately, not all of them put the care and well being of seniors front and center. Little by little though, the model evolved to become something better.

In honor of Nursing Home Week this May 10-16th, we take a look at the history of nursing homes in America.

Poorhouses, sometimes called almshouses, were present in the United States starting around the 17th-century, when the concept was brought over by English settlers. In theory, the homes were meant for the “undeserving poor,” people that the community didn’t feel were worth spending their money to help. In practice, many of the people that didn’t fit neatly into society or have an easy time working – the mentally ill, orphans, and the poor elderly – found themselves sent to poorhouses.

That became especially true after the Civil War, in which many previously wealthy or at least comfortable families lost their money. When it was harder for people to take care of their elders in their own homes, the poorhouses became a sort of last-resort option in spite of their reputation for deplorable conditions.

Poorhouses certainly earned that reputation in some places, but there’s evidence that they weren’t all terrible. After the 14th amendment was passed, poorhouses became voluntary and some seniors would choose to spend time there for the sake of companionship or to save on bills in the cold months of the year,

While poorhouses continued to exist into the early 20th-century, increasing criticism caused alternatives to arise that separated out the different populations that had previously been lumped together in the homes. Many seniors at this point moved into board-and-care homes where they could rent a room, receive a basic level of care, and have a couple of meals provided each day.

These homes became especially popular when social security was established in the 1930’s. The law that created the system banned any seniors living within a poorhouse from receiving payments, giving many the incentive and means to move into slightly better conditions.

The Growth in Nursing Homes

In the 1950’s, it was common for seniors to go to the hospital and end up staying there for long periods of time. In response to this, the government developed grants for people to build nursing homes that provided care similar to what seniors would receive in the hospital, but that were better equipped for longer stays. From the early 1950’s to the 1970’s, the number of nursing homes grew considerably in consequence, from 6,500 to 16,000.

The Slow Path to Reform

This growth in facilities where seniors could live while being cared for by medical professionals was largely an improvement over earlier options like poorhouses, but there were many abuses. Little by little, from the 1950’s through the 1970’s, different laws were passed to help improve the conditions in nursing homes. Often the laws tied requirements to funding, particularly once Medicare and Medicaid were introduced and began to make up a large amount of the money flowing into nursing homes.

The 1965 Moss Amendments forced nursing homes to comply with safety codes, keep registered nurses on staff, and provide a higher level of transparency to make fraud and abuse easier to spot. The 1987 Nursing Home Reform Act established and defined the types of services nursing homes were required to provide seniors and introduced the Residents’ Bill of Rights. Each step of the way, things became a little better for your average senior living in a nursing home.

The Age of Consumer Choice

In recent years, we’ve seen a much faster form of progress come onto the scene. The internet gives consumers more control to research almost every decision they make, and complain anytime their experiences aren’t up to par. As such, seniors have the power to make informed decisions based on the level of service nursing homes and other senior living facilities provide. Nursing homes aren’t just subject to government scrutiny now – they have to answer to every single resident living there and all their family members, any one of whom can voice their feelings on the internet.

People are definitely taking advantage of this option. There are over 76,000 reviews on this website alone. And any senior with an experience – good or bad – of a nursing home is encouraged to add their own. Seniors now have the power to help each other avoid the worst senior living choices and seek out the best. We’ve come a long way since the poorhouses.

Nursing Home Visit
How Safe Is Your House?