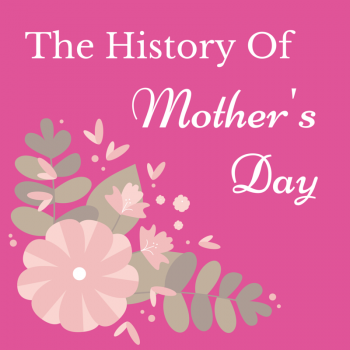 Where did Mother’s Day originate? How did it come to be? Here’s a quick look at the history behind it. The second Sunday in May is Mother’s Day in the U.S. due primarily to the efforts of Anna Jarvis of Grafton, West Virginia, who wanted to honor her mother who had worked to promote unity during the Civil War.

While Mother’s Day is celebrated all over the world, often on different days, many international celebrations are influenced by the American holiday. Anna Jarvis wanted to honor her mother, Ann, after her death in May of 1905. John Wanamaker, the merchant, helped her to popularize the holiday by holding a Mother’s Day service in the auditorium of his Philadelphia store on May 10, 1908. At the same time, a small service was held in the church where Ann Jarvis had been a Sunday school teacher in Grafton, WV. This was the second Mother’s Day service held at the church, as a small service had been held the previous year. But after the 1908 double service in Philadelphia and Grafton, the following year there were services all over New York.

Anna Jarvis then campaigned to have Mother’s Day made a national holiday. West Virginia was first to declare it in 1910, followed quickly by the other states. On May 8, 1914, the U.S. Congress passed a law designating the second Sunday in May as Mother’s Day and requesting a proclamation from President Woodrow Wilson who complied the next day. In 1934 Franklin D. Roosevelt approved a postage stamp commemorating the holiday.

This was not the first effort to set aside a special day to recognize and honor mothers. Many efforts sought to honor mothers who had lost a son in battle or who were at risk of it. There were groups of women who had lost sons in the Civil War and who wanted to promote peace. Ann Jarvis, Anna’s mother, organized a Mothers’ Friendship Day to reunite friends and families who had been divided by the Civil War. She had organized work groups of mothers who helped improve the sanitation in the camps of both Union and Confederate soldiers during a typhoid outbreak. Mrs. Jarvis wanted to expand this to a day to recognize all mothers, but her death prevented her. So, her daughter took up the challenge and succeeded.

Other efforts include Julia Ward Howe’s organizing a Mothers’ Day for Peace in 1872 in New York. In 1877 in Albion, Michigan, Juliet C. Blakeley stepped to the pulpit to give an impassioned plea for temperance that so moved her sons, who were traveling salesmen, that they vowed to return each year to pay her tribute. At the urging of her two sons, in the 1880s the church declared the second Sunday in May to be Mother’s Day.

Because the carnation was her mother’s favorite flower, Anna Jarvis chose it to represent Mother’s Day. She distributed 500 white carnations at the first official Mother’s Day service. In hopes of expanding sales to more varieties, florists began touting the wearing of a red carnation if one’s mother is alive and a white one if she is deceased. The florists repeated this so often that it has become custom. Many churches give away carnations on Mother’s Day to the women in the congregation. Unfortunately Anna Jarvis so disliked the commercialization of the holiday that she spent the later years of her life trying to get the holiday removed from the calendar.

Whether you wear a red carnation or a white one, we hope that your Mother’s Day will be a sweet one.

What is a Therapy Dog?
Medicine Cabinet Must-Haves