My grandmother, Martha, a feisty woman, used to fulminate against her sister-in-law, Rebecca, because at the very young age of 75 Becky had taken to sitting by a sunny window all day not far from Brighton Beach, crocheting sweaters and tiny hats for newborns. “She’s old before her time, just throwing away her life when she can still get up, go outside and take the air.”

Grandma Martha had a candy store in Brooklyn acquired when she came from the old country and that kept her on her feet all day. In her old age, she was first baffled, then charmed by the runners in the streets from a nearby Sparta Club “who run every which way in their underwear” and became an advocate of exercise. She didn’t subscribe to it very heartily herself because it was too immodest for a woman (she said) to run around half-naked. “A woman like that  can only make a spectacle of herself and never get a husband.” But Grandma Martha did walk slowly around the block each day into her mid-eighties, even when she used a cane. 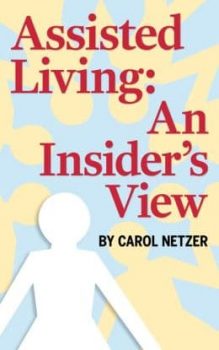 She was an example to me. When I grew old and went into assisted living, with Grandma’s dictum in mind, I continued to exercise. Then I wrote a book about what it’s like to be in assisted living, making certain to include a chapter on exercise for seniors. (Assisted Living: An Insider’s View. You can get it on Amazon.com in either paperback or e-book format here). The following is a summary of what I say in that chapter:

In our day, we know that exercise for old people is good for body and soul, good for morale and can improve and prolong life. Exercise is beneficial at any age, but many people in their seventies or eighties are unwilling to try it, especially if it has not been part of their regimen at a younger age.

The opposite is true. The underuse of the body is harmful at any age. Seniors, like everyone else, need to keep up their strength. The International Council on Activities vigorously promotes senior fitness. Exercise helps the aged, and they insist, that no one is ever too old to start.

This is a hard sell. To the sedentary, exercise is too unpleasant. You have to do it every day. The best reply to this complaint is that exercise can help an old person to stay healthy, live longer and remain independent.

Exercise builds brain power too. People who exercise regularly tend to remain mentally sharp well into their eighties and sometimes beyond. Look at George Bernard Shaw, a vigorous walker, who wrote challenging plays into his nineties. A six year study of over 1700 adults aged sixty-five years and older (reported in the Annals of Internal Medicine) found that people who exercised more than three times a week had a lower risk of dementia than those of the same age and gender who did not exercise at all.

How’s that for an incentive?

On the other hand, there are health risks for the sedentary. Old people who do not stay active gain weight and risk putting pressure on their joints because of the weight gain. Their balance is poor as well, making it harder to move in comfort. They move slowly and with difficulty and are more likely to fall. Their inactivity also puts them at greater risk for diabetes and heart problems that may shorten their lives. Exercise can prevent or delay many of these conditions.

Perhaps the most powerful argument of all is that exercise can reduce or eliminate the embarrassing dependence that comes with age. If they exercise, older people can stay independent longer. There is no greater incentive.

As it stands now, the statistics are dismal. According to government records only eleven percent of people over 65 exercise and only six percent of them engage  in physical and strength training at all.

And yet if we spread the word, there is the ultimate inducement: there is growing evidence that those 65 or older who engage in strength training at least twice a week show an improvement in brain power! Using our lungs sends more oxygen to our blood vessels and on into the brain. Exercise also reduces the risk of high cholesterol, diabetes, high blood pressure and stroke. Any of these diseases can lead to memory loss. It is more and  more likely that exercise will not only reverse these risks but will have a beneficial effect on the brain. Because exercise increases the connection between the brain cells!

Scientists used to believe that humans were built with a finite amount of brain cells and would never generate more. But they now know better. They determined during autopsies that adult brains contain quite a few new neurons! Fresh cells were especially prevalent in the hippocampus, indicating the creation of new brain cells.

Here is a short list of the benefits from exercise. If you keep it near you, it will spur you on your way.
1.    Exercise helps maintain fitness and flexibility.
2.    It staves off trouble balancing.
3.    Exercise helps to manage diseases like high blood pressure, diabetes, osteoporosis and depression.
4.    Exercise helps weight loss and avoids weight gain.
5.    Exercise improves your brain!

And if you do it often enough, exercise becomes addictive—the one good addiction!

The above is an excerpt from Carol Netzer’s new book Assisted Living: An Insider’s View. Purchase the book on Amazon here.