Classic Books of the Silent Generation 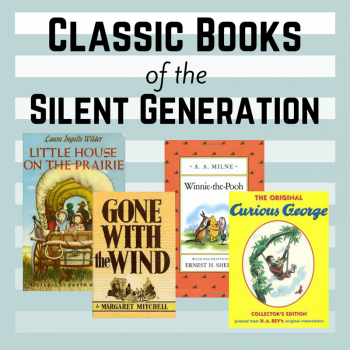 The Silent Generation doesn’t get a lot of press compared to the Greatest Generation before it and the Baby Boomers who came after. But the Americans born between 1925 and 1942 were young witnesses to some of the century’s most pivotal and challenging times—the Great Depression and the Dust Bowl drought–and the popular books of that era reflect a mix of optimism, gritty realism, and critiques of the excesses of the American way of life, with some escapism thrown in for fun.

The children of the Silent Generation were the lucky audience for many books that are still popular today. A.A. Milne’s Winnie-the-Pooh debuted in 1926, followed by Now We Are Six in 1927 and The House at Pooh Corner in 1928. The Doctor Dolittle series by Hugh Lofting spanned the years 1920 to 1948.  Other 1920s adventure series included the Hardy Boys detective novels, and the first novel in The Boxcar Children series originally appeared in 1924.

The adventure trend continued through the 1930s with Little House on the Prairie by Laura Ingalls Wilder, T.H. White’s The Sword in the Stone, and The Secret of the Old Clock, the first Nancy Drew mystery. Perhaps the biggest adventure-fantasy story to come from the 1930s was J.R.R. Tolkien’s The Hobbit, one of the century’s most popular works of fiction. The decade also saw the first children’s book from Dr. Seuss (Theodore Geisel), And to Think That I Saw It on Mulberry Street.

Some exceptionally popular books for very young children came out in the early 1940s, including a few that Silent Generation grandparents have probably re-read to their children and grandkids. The Runaway Bunny, Margaret Wise Brown’s picture-book tale of motherly love, Pat the Bunny by Dorothy Kunhardt, and Curious George by H.A. Rey all appeared in the early years of the decade.

An examination of life in America and beyond

The Silent Generation years saw a flourishing of fiction that cast a critical eye on society, politics, and human nature. F. Scott Fitzgerald took aim at the excesses of the Jazz Age in The Great Gatsby. World War I and its aftermath were examined in the novels A Farewell to Arms by Ernest Hemingway and All Quiet on the Western Front by Erich Maria Remarque. Pearl S. Buck chronicled social upheaval in China in The Good Earth, and Aldous Huxley presented an ominous future for an increasingly technologized society in Brave New World.

The novel that captured public attention like no other was Margaret Mitchell’s Gone With the Wind. The book (and the movie that followed) generated controversy over its depiction of Civil War racism, but many Depression-era readers identified with Scarlett O’Hara’s post-war struggles.

Of course, readers sought a break from hardship, too, in the form of inexpensive, fantastical and sometimes racy pulp fiction. Depression-era pulps were actually magazines rather than books, often about Western cowboy heroes, bizarre space aliens, and mad scientists. But why quibble? Pulp stories gave readers a much-needed break from day-to-day life.

What are your favorite books from the Silent Generation years?

What to Eat with Type 2 Diabetes
Cremation Funeral Service Checklist