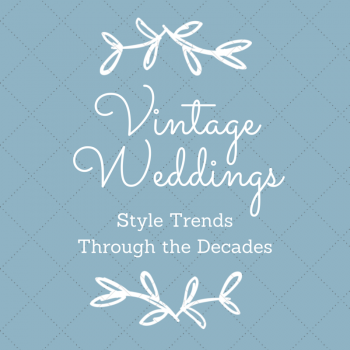 Style Trends Through the Decades

Brides and grooms have always taken special care in planning the perfect day for their wedding, most likely unaware at the time of how their choices reflect the style and social environment of the day. Looking back at weddings through the decades, it’s interesting to see how everything from fashion to ceremonies has evolved, often cycling back once or twice. One thing remains the same, however; couples have always worked to make the most of their resources and dreams to create the perfect celebration of their love.

The invention of the phonograph meant the introduction of dancing at wedding receptions, with popular dances like the tango, the turkey trot, and the waltz being popular. Wedding dresses embraced a more flowing silhouette, ideal for enjoying the reception music.

The economic difficulties of the Depression era often meant brides chose more affordable materials (such as rayon) for their wedding dress, in a style that could be dyed and worn again after the wedding. Many simply chose to wear their nicest dress, often floral and calf-length. Hats were also popular, as opposed to traditional veils, and Art Deco was the style of choice for reception decorations.

The wartime bride had to balance practicality with timing, often having to quickly plan the ceremony around the deployment orders of her fiancé. Brides worked around economic difficulties by using furnishing materials (like those used for curtains) to create their wedding dresses and veils, as well as paper flowers for bouquets. The 1940s saw the introduction of wedding rings for men, especially since many grooms were later deployed, using the ring as a sign of connectedness during their separation.

Gloves, both long and short, were in fashion for 1950s brides, often made of tulle, lace, or satin, while shorter hemlines meant more attention paid to the bride’s shoes, and shorter veils. Elizabeth Taylor’s character in Father of the Bride and Grace Kelley’s iconic 1956 wedding dress popularized the sweetheart neckline, and many wedding dresses were designed to be worn with bolero jackets that could be removed after the ceremony. Men began wearing shorter, single-breasted jackets and slim, tapered pants.

The daisy was the flower of choice for brides in the 60s, and brides used them in bouquets and as embellishments. Metallic embellishments also became popular in the Space Age, and brides often wore empire-style dresses and chose pillbox hats with bouffant veils.

The free-spirit of the decade could be seen in the wide range of wedding gown choices for brides, ranging from vintage throw-back looks, to hippie styles, and even full princess gowns.

Formality for weddings returned in the 80s, with intricate wedding cakes reaching towering heights and men wearing formal morning suits. Princess Diana’s wedding greatly influenced fashion for both brides and flower girls, and for the first time, couples were able to record their ceremonies and receptions on video.

This decade saw an increase in destination weddings, held on beaches or resorts, as well as the rising popularity of elopements. For brides, a new sheathe-style dress became popular over the ornate dresses of the 80s, like that of Carolyn Bessette’s for her marriage to John F. Kennedy, Jr. in 1996.

As more brides began to choose locations other than churches for their ceremonies, the strapless gown grew in popularity. Couples also began to wait until later in life to get married, with the median age for first-time marriages for both men and women rising. Weddings became a popular topic in pop culture, with numerous movies being released revolving around wedding ceremonies and brides.

Brides in the mid-2000s again began embracing diversity in dress, ranging from full ball gowns embellished with crystals and lace, to form-fitting “mermaid” dresses. Online sites like Pinterest allowed brides to create virtual bulletin boards with wedding ideas, often shared between other brides, and brought a resurgence of do-it-yourself decorations, crafts, and personalization.

Share your vintage wedding photo in our Facebook photo contest – you could win a $50 Amazon gift card!