5 Women Who Inspire Us by Making a Difference 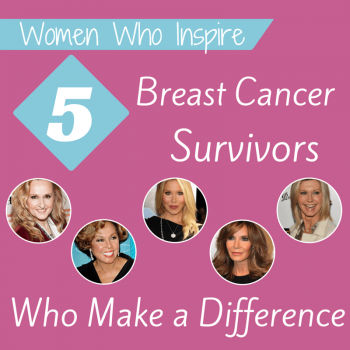 Everyone, no matter how wealthy or successful, encounters difficult times in life. Everyone has to figure out how to face the challenges that arise and get past them with as much strength and dignity as possible. The most impressive amongst us come out on the other side of their struggles and see their experiences as an opportunity to make things better for others.

One in eight women can expect a breast cancer diagnosis in their lifetimes. With numbers like that, it’s no surprise that many of the female actresses, musicians and other public figures of note (and a few male ones as well) have publicly shared their experiences dealing with breast cancer.

Some of these famous survivors go the extra mile to help others suffering from or at risk of the disease. With Breast Cancer Awareness Month upon us, here are five inspiring breast cancer survivors working to make a difference.

You may know her better as Kelly Garrett, one of Charlie’s angels in the popular 1970’s television show. In the years since, she’s continued to work hard, even as she raised a family. That strength stuck with her as she underwent radiation treatments for her breast cancer, all while continuing to work on the TV show The District.

In the years since she beat breast cancer, Smith has turned part of her attention to helping others struggling with it. She was involved in Strength in Knowing, a support website created to help urge women to find the support system they need to get through the experience. She’s also worked with Susan G. Komen For the Cure to raise money for the cause, and donates a portion of the profits from her clothing and furniture lines to cancer research organizations.

Between the movie Grease and a successful music career, Olivia Newton-John had achieved icon status by the early 1980’s. In spite of a lifetime of healthy living (as evidenced by the famous “Physical” music video), at 44 she got her breast cancer diagnosis. She quickly went into treatment, getting a mastectomy and undergoing chemotherapy, and managed to kick the disease. She’s been cancer-free in the years since.

Like Jaclyn Smith, Newton-John has also worked with Susan G. Komen for the Cure, as well as starting the Olivia Newton-John Cancer Research Institute and a Cancer and Wellness Center in Melbourne, Australia to help fund research and treat those with the disease.

With a number of popular comedy series and movie roles under her belt, Christina Applegate has found consistent success in Hollywood ever since her breakout role in Married…with Children. When Applegate tested positive for the BRCA1 breast cancer gene, she went ahead with a double mastectomy.

Applegate recognizes that her success made it easier for her to get the preventative tests and procedures that are difficult for some women to afford. She therefore founded Right Action for Women, an organization devoted to helping at-risk women afford the cost of the MRI required to better detect breast cancer.

With a long, successful (and still going strong) career full of the non-stereotypical roles rare for black women in much of the time she was working, Diahann Caroll’s made a memorable mark in Hollywood. Although she had no symptoms or family history of the disease, her doctor found a tumor in a routine mammogram. With a lumpectomy and radiation therapy, she was successfully cured,

She made the difficult decision to take her story public, allowing Connie Chung to report on her experience as she sought treatment. In the years since, she’s launched a campaign to travel the country and help other women, particularly those in minority communities, learn of the risk and the preventative measures they can take. She started the previously mentioned online support site, Strength in Knowing to help educate women and provide them a support system.

After years of being a rock star, and one of the earliest celebrities to take the bold stand of coming out in the 1990’s, Melissa Etheridge was diagnosed with breast cancer in 2004. She took another characteristically bold stand in 2005 when she chose to perform live at the Grammys, bald from her chemotherapy treatment and without a wig.

Since beating breast cancer, Etheridge has been involved in helping raise money and awareness for the cause through Hard Rock Cafe’s Pinktober campaign.

You don’t have to go on to head fundraising campaigns and start organizations in order to be laudable as a breast cancer survivor – or a survivor of any other illness or challenge – you just have to get through it on your own terms.

For Breast Cancer Awareness Month, remember that taking care of yourself to the best of your ability is the most important first step. If you can find a way to help other people too, go for it. You might find the experience is as powerful as that of conquering your own battles.