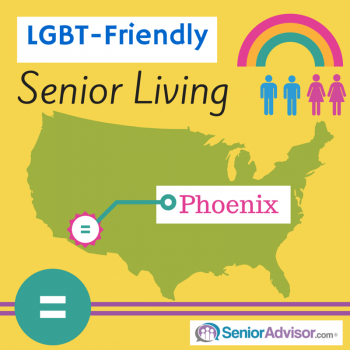 Phoenix is justifiably proud of its reputation as a retirement destination and just as proud of its perfect score on LGBT friendliness, as measured in 2013 by the Human Rights Campaign’s Municipal Equality Index. On every topic, from non-discrimination policies to overall rapport with the LGBT community, Phoenix is at the top of the class. The city also offers plenty of LGBT-friendly clubs, events, social services, and fun.

Connecting with the Phoenix LGBT community

New residents to the city of all ages can start making new friends and finding fun things to do through local Echo Magazine, the state’s biggest LGBT magazine. Echo profiles LGBT newsmakers, covers local and national issues, keeps readers up to date on special events, and maintains a listing of LGBT-friendly nightclubs and other venues around town.

Another valuable resource is the Phoenix Pride LGBT Center, where residents can find wellness classes, support groups — including some specifically for older adults, health services, and fun activities like tango classes.

The Phoenix Area Agency on Aging has received national recognition for the way it provides LGBT senior services — by working with other LGBT community groups and by making sure all of its staffers, not just the LGBT specialists, have a firm grasp of the issues that LGBT seniors deal with. Among the more than 20 services offered by the Phoenix Area Agency on Aging are a 24-hour helpline for seniors, case management services for HIV positive people, help with Medicare and Medicaid benefits, and hot meal delivery for seniors who cannot leave their homes.

Lots of dining and entertainment options in Phoenix

The Encanto area of Phoenix is home to more than 2 dozen clubs, bars, and restaurants that are popular with the local LGBT community. Charlie’s and the Cash Inn are popular with the boot-scootin’ country dancing crowd. Leather fans will feel at home in the Anvil Bar, while Karamba serves up an eclectic mix of Mexican cumbia, salsa dancing, and pop diva tribute nights.

On the quieter side, Harley’s Bistro is the go-to spot for authentic Italian food, local art, and a monthly drag “brunch with benefits” to raise funds for LGBT and other community groups. Harley’s serves up nostalgia along with its gnocchi and shows — Paul Newman, Robert Mitchum, and Robin Williams all dined here.

Phoenix Pride hosts big events in the spring and fall, including 10 Days of Pride in early spring, followed by a 2-day Pride Festival with a parade, pageants, and more than 100 shows on several stages in Steele Indian School Park. The free fall Rainbow Festival draws some 20,000 revelers each year for craft beers, live music, and more.

In the middle of it all in Phoenix

Seniors who want to stay close to all that Phoenix’s LGBT community has to offer can explore independent living options in and near the Encanto area, such as the Tuscan-themed Chris Ridge independent living community and the Stratford assisted living community. But based on the number of social and service options — not to mention Phoenix’s top marks for equality — all of Phoenix is a great place for LGBT seniors.

How Much Does Phoenix Assisted Living Cost?

How Much Do Phoenix Nursing Homes Cost?