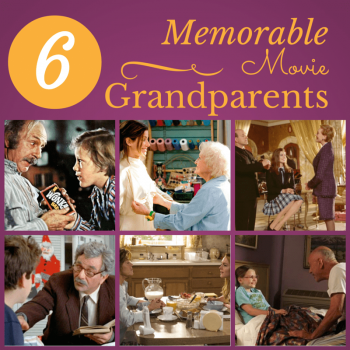 These days, it’s challenging to find many onscreen examples of loving, happy relationships between the generations. In many cases, the role of “grandparent” in a script might be vaguely nondescript or blatantly stereotypical. However, there are a few gems out there that bring humor, spirit, and tenderness to the role of grandpa or grandma. In honor of National Movie Month, we present 6 of the best. Do you agree with our list? Did we forget your favorite movie grandparent? Let us know in the comments!

Willy Wonka and the Chocolate Factory (1971)

Although previously bed-ridden, Grandpa Joe (Jack Albertson) catches the spirit from grandson Charlie’s dream of visiting a famous and mysterious chocolate factory. Soon he’s pulling himself out of bed, donning his best (tattered) clothing, to accompany his underprivileged grandson on a tour of the factory, thanks to a special golden ticket. Throughout the journey, Grandpa Joe shares the excitement and wonder of the visit, and eventually, a life-changing moment for Charlie at the end of the tour.

Before Lindsey Lohan became a huge star and a tabloid sensation, she was Rachel, a reckless, spoiled teenager whose alcoholic mother drops her off to spend the summer with her feisty grandmother, Georgia (Jane Fonda), in punishment for bad behavior. The two soon butt heads, as Rachel discovers that her grandmother can be just as tough as she. In the end, Georgia learns the deeper truths behind her granddaughter’s troubles, and finds a way to support and defend her in a way no one has before. 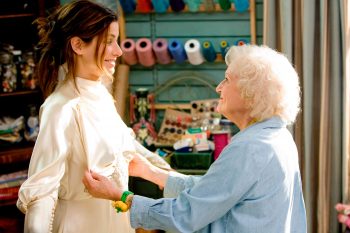 Although Grandma Annie (Betty White) plays a periphery role in the main plot, her scenes and quips are unforgettable. When her grandson brings his questionable fiancé (who also happens to be his boss, in danger of deportation to Canada if she does not get married) to visit the family in Alaska, a hilarious chain of events unfolds, as the family tries its best to embrace the uptight Sandra Bullock with pre-wedding family events. The scene with Grandma Annie dancing around a campfire rapping a hip-hop song absolutely cannot be missed.

A sweet and caring relationship between grandfather (Peter Falk) and grandson serve as the backdrop for this fantastical adventure film. A young boy stays home sick from school, but rather than goofing off and playing video games, his grandfather stops by to keep him company and read him a good book. Most of the story takes place in the pages of the story, although the scenes are occasionally broken up with moments of conversations between the grandson and grandfather. The grandson, despite his best efforts, is drawn into the page-turning plot, and can’t help but get excited to hear what happens next. 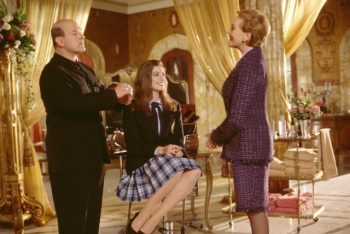 Geeky, gawky 15-year-old Mia Thermopolis quite suddenly discovers she is the heir to the throne of a European country called Genovia when her long-lost grandmother (Julie Andrews), the queen, shows up at her doorstep. Mia is whisked away for a makeover and intensive princess training, learning about royalty, waves, and manners. During the process, she must decide whether or not she will become a true princess or relinquish the crown. Throughout the film, Queen Renaldi plays a stoic, proper role, with hints of humor, tenderness, and compassion that grow as she gets to know her estranged granddaughter. 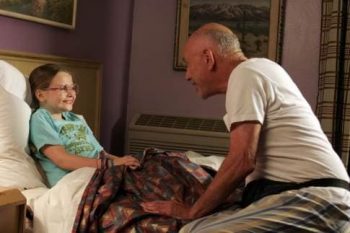 Not all grandparents are exactly role models, but even the rogue ones can have hearts of gold. That’s exactly the case of the grandfather (Alan Arkin) in this wild ride of a film, telling the story of a family packing up a VW bus and heading cross-country to get the granddaughter to her beauty pageant finals. Like any dysfunctional family road trip, the story is full of arguments, laughter, turmoil, and surprises. The thing not to miss is the sweet relationship between the less-than-perfect grandpa and his clever granddaughter, who despite any imperfections, shows real love.

Visit SeniorAdvisor.com to find ratings, reviews, and information on assisted living in Houston and other cities.

Save Money on Prescriptions
Luxury Retirement Homes in Minneapolis