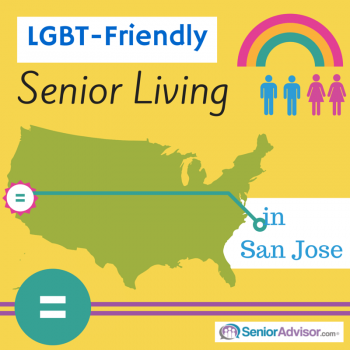 San José may not be the first California city that comes to mind for LGBT senior living, but don’t overlook it. The city and Santa Clara County have a smaller LGBT population than San Francisco and higher housing costs than San Diego, but San José shines when it comes to LGBT senior programs, a well-connected LGBT community, and a county government that’s moving forward on one of the most progressive LGBTQ service initiatives in the nation.

If you’re considering retirement in Silicon Valley or the Bay Area, here’s what you’ll find in and around San José.

In March 2015, Santa Clara County officials unanimously agreed to create a new Office of Lesbian, Gay, Bisexual, Transgender, and Queer Affairs to bolster services and legal protections for the county’s LGBTQ residents. Under the plan, the office will train all county departments on serving the LGBTQ population and it will liaison with other governmental groups and community agencies.

Among the issues the office will address are housing discrimination, homelessness, healthcare access, and discrimination, including eldercare issues faced by LGBTQ seniors. While there are already agencies and services in place to deal with many of these issues, the county office will provide additional resources and coordination.

A community center in the heart of historic San José

The Billy DeFrank LGBT Community Center serves more than a thousand visitors a month from its location on The Alameda, west of downtown. The DeFrank Center reaches residents across the region with a number of support groups, social events, and fun happenings.

The regional LGBT community sponsors special events throughout the year. These include the annual Dining Out for Life fundraiser for AIDS Services, co-sponsored by Project More Foundation of Santa Clara, and Earthquakes Equality Night in August with San José’s pro soccer team. California’s Great America theme park in nearby Santa Clara hosts a popular Pride Night with live music every Memorial Day Weekend.

San José is well-known for the high cost of its housing, so people who plan to move there should be prepared for higher than average rental rates and home prices. There are several privately managed affordable senior apartment communities around San José, and the city is home to several dozen assisted living centers and skilled nursing facilities, including Belmont Village, which earned a 2015 SeniorAdvisor.com Best of Assisted Living Award from families and residents.

How Much Does San Jose Assisted Living Cost?

How Much Do San Jose Nursing Homes Cost?

Find assisted living in San Jose near you.