SeniorAdvisor.com Blog > Blog for Families > Alzheimer's Care > What is the Difference Between Alzheimer’s and Dementia?

What is the Difference Between Alzheimer’s and Dementia? 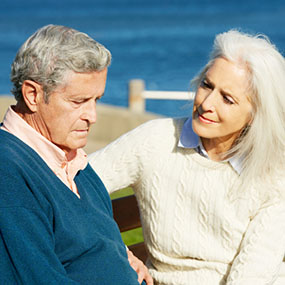 While Dementia and Alzheimer’s are equally trying conditions in their own right, they are also two very different and distinct afflictions, with two different types of symptom sets.

Dementia is a term that has replaced the old fashioned “senility” term, and referring to cognitive changes with advanced age. Dementia includes a group of symptoms, the most prominent of which is memory difficulty. These cognitive problems are a noticeable change compared to the person’s cognitive functioning earlier in life, and are severe enough to get in the way of normal daily living, such as occupational and social activities. Dementia refers to a set of symptoms, not the disease itself.  Other symptoms might include poor judgement, language difficulty or loss of recent memory.  When someone is said to have dementia, they are exhibiting certain symptoms. With a thorough screening including a brain scan, neuropsychological testing, a mental status evaluation and blood tests to rule out other causes of dementia such as vitamin deficiency, physicians can accurately diagnose the cause of the dementia symptoms nearly every time.  Not true with Alzheimer’s Disease.

While dementia can be vague in its symptoms and formal diagnosis, simply put, it does mean that there is something wrong with a person’s brain, but most of the time those causes of cognitive difficulties and memory loss are unknown.

Dementia is not a disease.  Rather, it is the clinical presentation or symptoms of a disease. There are many possible causes of dementia. Some causes are reversible, such as a vitamin deficiency or certain thyroid conditions. If these underlying problems are identified and treated, then the dementia reverses and the patient can return to normal. However, most causes of dementia are not reversible. Rather, they are degenerative diseases of the brain that get worse over time. The most common cause of dementia is Alzheimer’s Disease.

Alzheimer’s disease accounts for nearly 75% of cases of dementia.  Other lesser causing disorders that lead to Alzheimer’s include Frontotemporal dementia, Lewy Body dementia, Parkinson’s disease and Vascular dementia. Among both Alzheimer’s and dementia, there are clear differences early on in each disease. In dementia with Lewy Bodies (the second most common cause of dementia), for example, early symptoms of the disease may be hallucinations, confusion and lowered attention.  Forgetfulness, although a very prominent symptom of dementia, may not always occur in dementia with Lewy Bodies. However, as this particular disease progresses, more parts of the brain may become affected, and the differences from one cause of dementia to another are less obvious.

Alzheimer’s Disease (AD) affects over 5-million people in the U.S. alone. As people get older, the prevalence of AD increases, with around half of people age 85 and older having the disease. And while Alzheimer’s is extremely common in later years of life, it is not part of normal aging. Nor is dementia. Simply put, dementia is a symptom, and Alzheimer’s Disease is the cause of the symptom.

When someone is told they have dementia, it means that they have significant memory problems as well as other cognitive difficulties, and that these problems are severe enough to get in the way of daily living.  In fact, dementia is every bit as serious as AD. There is not a continuum with dementia on one side and Alzheimer’s at the end of that continuum.  Instead, there can be early or mild stages of AD, which then progress to moderate and severe stages of the disease.

Why Do People Confuse Dementia with Alzheimer’s

One reason for the confusion about Alzheimer’s and dementia is that it is not possible to diagnose Alzheimer’s with 100% accuracy while someone is still alive. Rather, AD can only truly be diagnosed after death, upon autopsy when the brain tissue is carefully examined by a neuropathologist. When a patient is alive, he or she can be diagnosed with probable Alzheimer’s disease, a term used by the medical community that indicates a person has symptoms and confirmed tests consistent with the pathological features and results found in deceased AD patience.

A final point to make about the two diseases is that no two persons are similar in how these diseases impact them.  However, the accuracy of a probable AD diagnosis is getting much better. New research is providing exciting ways to accurately diagnose Alzheimer’s during life.

David Novak is a international syndicated newspaper columnist, appearing in newspapers, magazines, radio and TV around the world. His byline has appeared in GQ, National Geographic, Newsweek, The Wall Street Journal, Reader’s Digest, USA Today, among others, and he has appeared on The Today Show, the CBS Morning Show and Paul Harvey Radio. David is a specialist at consumer technology, health and fitness, and he also owns a PR firm and a consulting company where he and his staff focus on these industries. He is a regular contributing editor for Healthline. For more information, visit http://www.healthline.com/.

To find Alzheimer’s care in Dallas or another city near you, visit SeniorAdvisor.com.

Health Alerts
Causes of Falls in the Elderly